A lesson in off-road driving

Our arrival on Boa Vista was smoothed by Bobby-Esther, a friend who runs a small agency managing apartments across the island. Bobby had started scouting places for us in the summer and found us an absolute gem, located on the beach (quite literally) in Estoril, the southern suburb of Sal Rei. As apartments go this has it all – basic, but super comfortable, with a cute terrace from which to watch uninterrupted views of the sun going down over the fishing boats moored in the bay and beyond to Ilheu de Sal Rei. Owned by a Cape Verdean-French couple with two kids it’s got everything we need; bunk bed in the boys room, two small shower rooms (very handy when traipsing in from the beach with two sand-ridden creatures), spacious lounge-kitchen-scooter race track, and a back yard to store all the surf gear. We’ve even a few rare luxuries including a washing machine, ceiling fans, a built-in water filter (massively reducing the reliance on bottled water and plastic waste) and the piece de resistance: we’re on mains (so no tanker deliveries for us).

The boys settled quickly into a routine which largely consisted of a pre-breakfast naked micro-scooter challenge with a pitstop for watermelon and Estralitas (overly sweet Cheerios) on the terrace. Followed by a 20-yard dash or carry to the beach. The tropical azure waters of the Atlantic soon washed away the relative stresses of the journey and preceding weeks. On the first morning, Zeb tried his new face mask, by the afternoon he was snorkeling independently in his arm bands. Oz, never one to miss out, screamed furiously until offered Zeb’s old goggles which he refused to take off even though he never gets his hair wet. We whiled away the first few days on utterly deserted beaches – we were the first non-residents to arrive on the island since the borders were closed and all international flights suspended in March. The absence of tourists and locals from the beaches painted a bleak picture of the impact Covid has already had on the island. Cape Verde’s GDP in 2019 was just under $2 billion, tourism and travel represent around 25% of the nation’s total economic output. No flights = no tourists = no work. The three main all-inclusive hotels on the island have been closed since April. Deserted beaches are both a blessing and a curse.

Towards the end of the first week we ventured further afield, renting a pick-up for a couple of days to refamiliarise ourselves with Boa Vista’s geography. Not a hard thing to do given we live on a piece of volcanic rock 31km long and 29km at its widest point. Until recently the island was criss-crossed by a series of cobbled roads and a myriad of dirt tracks navigable only by 4×4. The upgrade of the mud-strip airfield to international airport in 2007 brought investment in hotels and the road network to serve them. Named after Cape Verde’s inaugural president, Aristides Pereira, it now brings 500,000 sun worshippers to the island annually and largely accounts for the explosion in Boa Vista’s population from less than 5,000 in in 2005, to over 16,000 today. You can now blitz from Sal Rei in the north to Santa Monica in the south, a beach often cited in the world’s top 10, on beautifully smooth tarmac, without seeing another vehicle in just 25 minutes.

It’s estimated more than a third of Boa Vista’s 16,000 inhabitants have returned to their home islands following the collapse of tourism.

We took the off-road option, hanging a right after the airport at Rabil, taking the hand-cobbled road to the oldest settlement on the island Povoacao Velha where the road ends and the fun begins. We pointed the Fiat Fullback west and headed into the desert. Ed pretended he was on some sort of landrover off-road course, while me and the boys bounced around in the back. Passing a few homesteads, Povoacao was soon obliterated by dust in the rear-view mirror as the red earth turned into beautiful white fine sand and we entered the dunes. We turned south shadowing the coast, following faint tracks of 4x4s and quad bikes which had previously passed this way. Every now and then the tracks would disappear completely, Ed would stop, check the ground ahead before whacking the car into 4-wheel drive and cracking on. All of a sudden, we rounded a dune and popped out on the southern tip of Santa Monica beach, rolling Atlantic breakers sent up spray as golden white sand stretched as far as the eye could see. We had the entire 7km stretch to ourselves – save the occasional scuttling sand crab and Boobie diving for fish. We found a secluded spot halfway along parked up, erected the bimini and left the boys to dig to Brazil. It was sublime.

As the sun set, we packed up and turned the car around to head for the main road back. Ed, clearly now an off-road guru, spun the pick-up around in what looked in the twilight like solid terra firma. We abruptly ground to a halt as the wheels broke through the crust into wet sand. Rocks were sourced for traction, holes dug, engines revved, expletives heard – before defeat was finally admitted and help called for from Sal Rei. We all took shelter inside as hundreds of sand crabs emerged to feast on crickets dancing in the headlights. We cursed daddy whilst giving thanks for the cool bag and air conditioning. The boys found the whole experience hilarious particularly when “Chase, Marshall, Rubble, and Sky” arrived two hours later in a jeep to pull us out before promptly getting stuck themselves. Another hour, 6 men, a jack, several pieces of 2 by 4 and we finally burst free of the mud. The 30-minute drive back to Sal Rei was on reassuringly smooth tarmac and in blissful silence as the boys slept and Ed nursed his ego.

On Sunday morning Ed washed away the evidence of mud and handprints decorating the chassis in a bid to avoid the inevitable drive of shame through town. All in all, it had been an action packed first few days. London already felt a distant memory and we had only just had our first weekend. 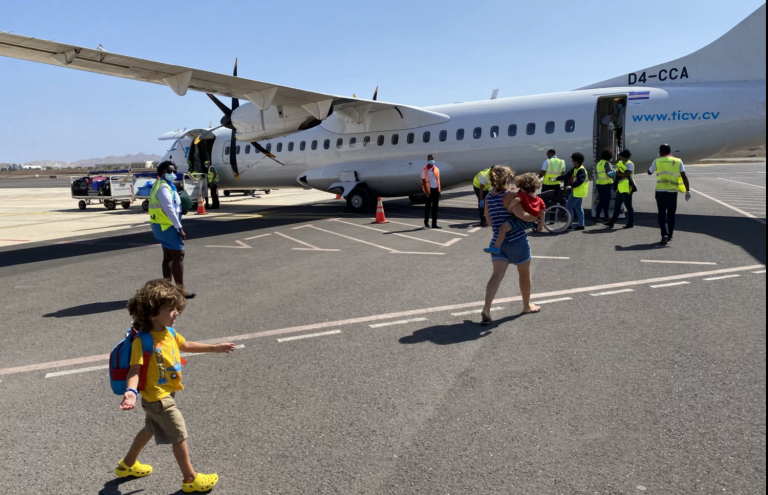